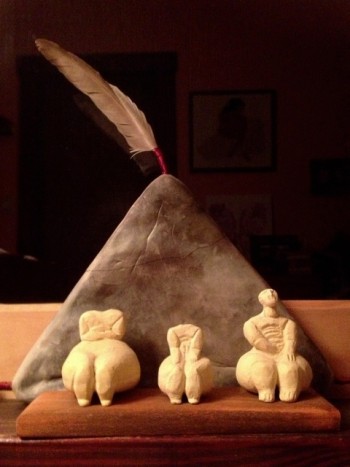 I remember the day very well. I was 11 years old. It was a Sunday. I went into my parent’s room and told my mother it had happened, I knew what I needed to do about it and not tell anyone.

“If I can’t tell anyone then neither can you.” she said.

There was no gathering of women welcoming me into the fold of womanhood or sharing with me the wisdom that can only come from women. No special gift or celebration, not even a day off from school.

It was a day like any other day in the early 70’s. Consciousness raising groups were popping up in the big cities but they hadn’t reached our suburban neighborhood and my mother hadn’t been taught any differently by her mother or grandmother.

I felt a big grief. “The Curse” was upon me and I believed I had lost something precious but I didn’t know what it was and had no one to talk to about it.

In the early eighties I facilitated my first Coming of Age ritual in a teepee in the mountains of eastern Washington. A friend’s daughter had just gotten her period, their relationship was rocky and her mother wanted to, needed to, do something special for her.

We gathered about fifteen women, two were grandmothers, some had watched the girl grow up, some older daughters who had already gone through puberty and three of the girl’s good girlfriends. The daughter was resistant at first, but when her friends ushered her into the teepee and she saw us all standing on either side of the doorway welcoming her with flowers, she coalesced.

We spoke into the circle the names we’d been taught to call our menses — “period, that time of the month, the curse, moon, ride the cotton pony, Aunt Flo’s visiting, shark week, crimson”.

We spoke into the circle the names we’d heard our below the belt anatomy called — “vagina, cookie, beaver, yoni, vulva, cee u next tuesday, love tunnel.”

The women took turns telling their stories of what happened when they got their first period. Some had sweet stories filled with mother love. Others had very funny stories. But it was heartbreaking to hear how so many of our stories were laced with negativity and shame.

We talked about the harsh reality of being a woman in a society that is still primarily a patriarchy. We shared stories of empowerment and stories of heartache. We laughed and we cried and the young ones laughed with us and witnessed our tears. The grown women opened the doors of their hearts, minds and their life experiences. The young woman were encouraged to ask us any questions they wanted about our lives, sex, relationships, and we answered them with honesty and frankness.

Many wonderful and healing things happened that day. We welcomed the next generation of women into the circle of womanhood and in their turn they told their stories and shared their hopes and their fears. We were each moved as we saw our own lives reflected in each other’s stories. Our circle became sweeter, stronger and rich as the blood flowing through our bodies.

I know that we were all somehow changed in a good way by that experience. A great healing took place for my friend with her daughter that could have otherwise taken years to resolve. Not that all was perfect afterwards but the lines of communication had been opened and a foundation was lain for a new relationship, woman to woman.

Our daughters are the women of tomorrow who will have the responsibility to raise the next generation of women. They deserve an honored place at our table.

I still offer coming of age rituals/cermonies and have developed several Mother/Daughter expressive arts workshops that touch on many of the issues and themes brought to light in that first circle in the teepee.

In Expressive Arts Burlington’s mother/daughter workshops we spend less time talking and more time forging our connections through song, movement, visual art and ritual. In these workshops daughters and mothers get to explore the foundations of what connects them to each other and the greater circle of women. They get to test the boundaries of where the one stops and the other begins and redefine their relationships in accordance with the changes apparent as the girls come of age. It is always fun, often profound, usually transformative and healing work that I am so honored to offer and witness.